Microdose Mushrooms presents Neuro Blend is a Psilocybin based supplement that provides users with all of the benefits of Psilocybin, without experiencing the overwhelming psychedelic effects. Neuro Blend is comprised of 80 milligrams of Psilocybe Cyanescens and a combination blend of Lion's Mane Mushroom, Chaga Mushroom, Reishi Mushroom and Niacinamide. This Mushroom stack will give users a sense of clarity, creativity, focus and mood elevation. Users will also experience a reduction in anxiety and depression, along with helping reduce the effects of numerous other unwanted mental states.

Neuro Blend works by imitating serotonin by stimulating the 5-HT2A receptor located in the frontal cortex. Stimulation of the 5-HT2A receptor causes two significant things to happen in the brain. One, it leads to the production of BDNF (Brain-Derived Neurotrophic Factor) which stimulates growth, connections and activity in different parts of the brain. Two, it increases the transmission of Glutamate, which is the neurotransmitter responsible for brain functions such as cognition, learning and memory.

Microdose Mushrooms Neuro Mood contains 250 mg of Psilocybe Cyanescens (a Psilocybin based mushroom), 125 mg of Ginseng (a plant root that has been used for centuries in traditional medicine), and 125 mg of Guarana (an effective stimulant often used as a dietary supplement). Microdosing is known to help those with depression and anxiety and Neuro Mood is a slightly higher than normal microdose, it’s effects can be euphoric and often more noticeable.

Psilocybe cyanescens is used in the Neuro Mood stack as it heightens your visual, auditory, olfactory and proprioception sensations to the point where you are immersed in the current moment and have a tremendous feeling of euphoria. Ginseng is added to the stack due to its ability to increase energy levels and improve your memory and mood. Lastly, the Guarana plant is added to the stack as it is a natural stimulant with numerous benefits. Guarana is rich in antioxidants, reduces fatigue, improves focus and memory among other benefits. Combined together, these three supplements have made Neuro Mood a favorite among users.

Neuro Mood is based off the popular “Scooby Snack Mushroom Capsule” which generally combines a high microdose of a psilocybin based mushroom with energetic herbal supplements. Many users find our Neuro Mood great for social outings as it provides an onset of energy and a euphoric experience.

There are no reviews yet. 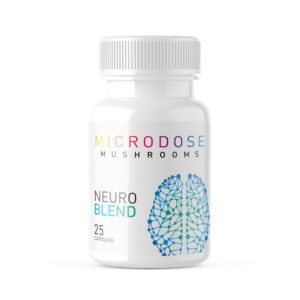